Fanny Bullock Workman (1859-1925), our March “Women of Discovery” profile, set several women’s altitude records, published eight travel books with her husband, and championed women’s rights and women’s suffrage. She wore many hats such as: wife, mother, explorer, cartographer, geographer, mountaineer and writer. She set much of the groundwork for women today in the field of land exploration. 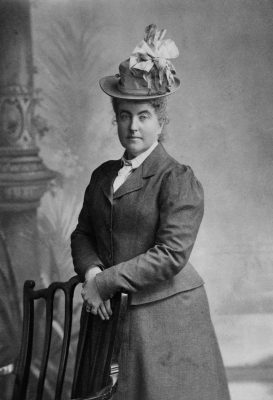 Workman was born in Massachusetts as part of a wealthy, elite family. At 22, she married William Workman, a successful surgeon. Instead of conforming to expected gender roles of the time, she chose to become a world explorer, alongside her husband. Workman used her wealth and status to her advantage by creating the life she wanted.


The couple left their two young children at their home in Germany to travel and investigate what the world had to offer, mostly by bicycle throughout Europe, North Africa, India, and Indochina.  Throughout these cycling trips they had much to overcome when it came to rough terrain and being able to keep essential supplies on hand, because they only kept with them as little as possible.

Their travels also included extreme mountain climbing in the Himalayan Mountains. Despite not having modern climbing equipment, they explored several glaciers and reached the summit of several mountains. On these expeditions they focused their research on glaciers and valleys. They would survey, map, write about, and photograph the many areas they uncovered. Fanny continuously set altitude records throughout their many climbs and expeditions. During these expeditions, Workman became one of the first women to climb Mont Blanc, the Jungfrau, and the Matterhorn. She set her highest altitude record in 1906 by climbing the 6,930m Pinnacle Peak, which was also the first ever ascent on that mountain. She was intent on setting altitude records, and while doing so campaigned for better monitoring and a more exact definition of achievement in mountaineering.

The Workmans gave presentations and wrote books on their adventures, a vehicle she used to draw attention to the extreme mistreatment of women she had encountered during her travels. In 1905, Fanny became only the second woman to address the Royal Geographical Society. Workman was known as feisty and competitive, and she used both of those characteristics to her advantage when it came to setting her mind to something.

Due to the beginning of the First World War, the couple’s travels ended in 1912. At this time they also moved from Germany to the south of France. Workman continued to travel throughout Europe to give institution lectures, and also wrote many books on their research in the Himalayas. Beginning in 1917 she became ill, and passed away in 1925. She was only 66 years old.

Workman broke several gender barriers with her exploratory spirit, especially as a pioneer in mountaineering. She was an extraordinary adventurer, and showed that through her many expeditions. Fanny not only strove to receive recognition for the elevations she achieved, but also that she, as a woman, excelled at the then-male-sport of mountaineering. Her accurate recording keeping of her achievements earned her a place in history, and paved the way for women who followed her. Both her altitude records and advocacy for women’s rights were truly remarkable, and left a lasting impression that is honored with a street named after her in Discovery West.