Over the next few months, we will be profiling the Discovery West “Women of Discovery” after whom many of our neighborhood streets in this new Bend, Oregon neighborhood will be named. Each of these women have made history in some way, whether it be from a major scientific discovery or an unusual or extraordinary contribution that made an impact. Our first profile, Annie Londonderry, is known as the first woman to bicycle around the world during the years of 1894-95. You’ll find the street “Londonderry Place” in Phase 1 of Discovery West. 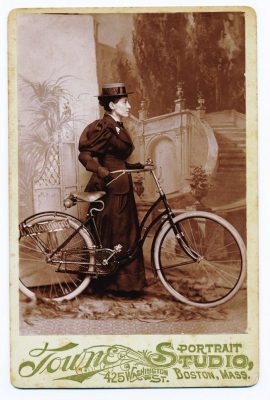 Annie “Londonderry” Kopchovsky (1870-1947) emigrated to the United States with her family from Latvia when she was just five years old. At the age of 24 and with $10,000 in prize money motivating her, Annie set out to become the first woman to bicycle around the world. A brilliant saleswoman and exceptional storyteller, Annie acquired her name as part of a deal with one of her sponsors, Londonderry Lithia Spring Water Company. Annie completed her task in fifteen months, launching a journalism career and writing about her adventures.

We had the amazing opportunity to connect with Annie’s great nephew, author Peter Zheutlin, who wrote a book about her adventures: Around the World on Two Wheels: Annie Londonderry’s Extraordinary Ride. Her ride made her into what some people see as the “first female international sports star,” paving the way for women to participate in sports more widely. While her ride was wrought with challenges (probably not the least of which was leaving her three young children at home) and her methods for publicity were sometimes questionable, there’s no doubt about her impact.

Peter put our team in touch with Mary Levy Goldiner, Annie’s granddaughter, who was thrilled that we were honoring her grandmother in this way. We had offered to make a donation on behalf of Annie, and Mary wanted the donation to go to a women’s rights and empowerment organization. She also, generously, wanted to keep the money in the Bend community, landing on World Muse as the beneficiary. World Muse, founded in Bend, connects women and youth to create positive change with a number of tools, resources and support.

In addition to bicycling, Annie gave lectures and wrote articles to gain attention for her adventures, as well as endorsing a number of products in order to earn extra money. Her entrepreneurial spirit earned her some attention as a “new woman,” from which she received an offer to become a journalist in New York City. She wrote:  “I am a journalist and a ‘new woman,’ if that term means that I believe I can do anything that any man can do.”