You probably know someone whose vision has been positively impacted by Dr. Donna Strickland’s discoveries. This month’s Women of Discovery profile features Canadian physicist, Dr. Strickland, who won the Nobel Prize for Physics in 2018 for her work with chirped pulse amplification, which allows smaller high-power laser systems to be used in a lab setting. This work laid the foundation for development very intense, short, sharp light beams capable of precision cuts, used often in today’s corrective laser eye surgeries. Beyond this, the work has several other applications such as machining of small glass parts for mobile devices, other micro-machining applications and serving as the groundwork for further research. 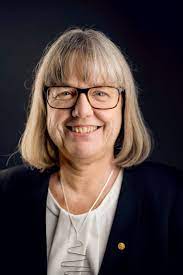 Born in 1959 in Ontario, Canada, Strickland became interested in lasers and electro-optics at an early age, and pursued her undergraduate degree in engineering physics at McMaster University. Her graduate work at the University of Rochester’s Institute of Optics led to her Doctor of Philosophy degree, and it was her doctoral work in the 1980s at the Laboratory for Laser Energetics with her mentor Gérard Mourou that eventually led her to Nobel Prize winning discovery. Chirped pulse amplification, simply put, creates extremely short and intense laser pulses without destroying the amplifying part of the laser, something which had previously been a limitation in the field. During their work, Strickland and Mourou first “stretched the laser pulses in time to reduce their peak power, then amplified them, and finally compressed them.” In this way the intensity and precision was boosted exponentially.

In addition to the Nobel Prize, Strickland has received high number of awards and recognition for her achievements. Just to name a few, she is a Fellow of The Optical Society, The Canadian Academy of Engineering and the Royal Society of Canada, and she has won awards from Premier’s Research, Research Corporation, American Academy of Achievement. Most recently, she was appointed to Pontifical Academy of Sciences. She also holds a number of honorary doctorates, and is a Companion of the Order of Canada. Most recently, she was inducted into the National Academy of Sciences (NAS), one of the highest honors for scientists in the United States.

Strickland currently is a professor at the University of Waterloo in the Department of Physics and Astronomy, where she continues her work in the field. There, she runs a laboratory for students called the Ultrafast Laser Group, where, as reported in the New York Times, “one of her favorite activities is to generate a full color spectrum of white light from a narrow bandwidth of wavelengths.” She is one of only three women to ever win the Nobel Prize for Physics.