Dr. Kathryn Sullivan holds two of the highest honors in the exploration field: she is the first American woman to walk in space, and is also the first woman to reach the deepest spot in the ocean. From the highest heights to the lowest depths, she is a true “Woman of Discovery.” 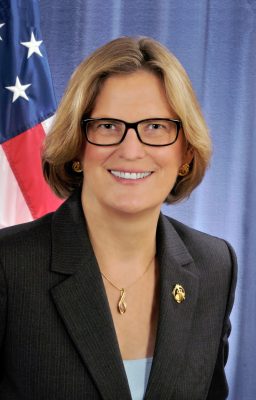 Dr. Sullivan was one of the first six women who, in 1978, became NASA astronauts. Dr. Sullivan was with NASA for 15 years, during which she logged 532 hours in space over the course of three total missions. Dr. Sullivan was also a vital part of the team that launched, saved, fixed, and maintained the Hubble Space Telescope.

As an ocean explorer, Dr. Sullivan reached the deepest spot in the ocean (the Mariana Trench), at 35,853 feet below sea level. She was the eighth person in the world to reach this location, and the first woman. This feat took place on June 7, 2020. She made the successful descent in the Limiting Factor, which is a two-person submersible, accompanied by explorer Victor Vescovo.

“I think the most important discoveries and new learnings for the future of the planet will categorically be in the sea,” said Dr. Sullivan in an interview with BBS Science Focus Magazine. She also recently served as the tenth administrator of the National Oceanic and Atmospheric Administration, the nation’s top science agency for climate, oceans, and the atmosphere.

Her distinguished career has led to many executive titles and honors ranging from a presidential appointment to the National Science Board and serving as assistant Secretary of State under the Obama administration, all the way to induction into the Astronaut Hall of Fame and Women Divers Hall of Fame, among many other awards. She holds nine honorary degrees, and received an Emmy award.

Dr. Sullivan continues sharing her knowledge and experiences by speaking at invited talks that include civic associations, the World Economic Forum, Fortune 500 executives, university students and more. Today she is an Ambassador at Large for the Smithsonian’s National Air and Space Museum, and is a Fellow of the Potomac Institute. She wrote about her Hubble experience and space adventures in her book “Handprints on Hubble.”

When asked in the same BBS interview referenced above about what it would mean if the first person on Mars was a woman, Dr. Sullivan responded with: “I think to countless young girls it would provide a dream, a point on the horizon and a dose of confidence ­– they could see somebody else do it and know it’s possible. And it could inspire parents – including fathers – to want to make sure their daughter has large-scale possibilities open to her.”

We spoke with Dr. Sullivan via email about our plans for Discovery West. When asked if we could name a street in her honor, her response was: “I would be delighted to have my name included in the Discovery West development.”

We made a donation to the Astronaut Scholarship Foundation to thank Dr. Sullivan for the honor of using her name on Discovery West’s “Sullivan Avenue.”