Many of us remember the launch of the space shuttle Discovery, sent on a mission to perform special experiments in 1993. The shuttle sent radio contacts to schools using amateur radio equipment, bringing space travel to life for many young people. The crew included Ellen Ochoa, the first Hispanic woman to go into space. While this mission may have been a defining factor for Ochoa, this month’s Women of Discovery profile, it certainly was only one high point of an illustrious career. 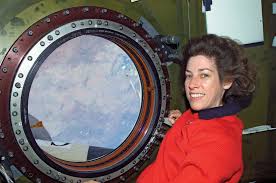 Born in 1958 in Los Angeles, Ochoa studied physics as an undergraduate at San Diego State University and then completed her master’s and doctorate programs at Stanford University in electrical engineering. Shortly after graduating in 1985 she applied to become part of NASA’s astronaut program.


While waiting for admittance, she wasn’t idle. Her engineering work in using lasers and other optical devices to process images led her to co-invent three patented systems in the field of information processing. In 1990, she was admitted to the astronaut program and three years later entered space on the Discovery, followed by three more missions: the Atlantis in 1994; Discovery‘s mission to the International Space Station (ISS) in 1999; and a return to the ISS on Atlantis in 2002. All in all, she has been in space almost 1,000 hours. Her spaceflight work with NASA led her to become the first Hispanic (second female) director of the Johnson Space Center from 2013-2018.

In addition to her engineering and astronautical work, Ochoa is an active proponent of women’s rights. During her mission in 1999, she and two fellow female crewmembers displayed a banner used by the National Women’s Party in the early 20th century while advocating for women’s right to vote. She said in an NBC interview, “I think we need all the best and brightest people working in science and engineering fields, and that is certainly not limited to men or white men or anything like that.” She regularly gives lectures and talks to encourage students – particularly girls and young women of color –  to enter STEM fields.

Today, Ochoa is referred to as a “veteran astronaut.” She is now serving as Vice Chair the National Science Board and evaluates nominations for the National Medal of Technology and Innovation. Over the course of her career, she has received many honors including NASA’s Distinguished Service Medal (2015), Exceptional Service Medal (1997), Outstanding Leadership Medal (1995) and she has been inducted into  the United States Astronaut Hall of Fame and the  International Air and Space Hall of Fame. She has had many schools named after her across the United States, and will now have a street named after her in Discovery West!