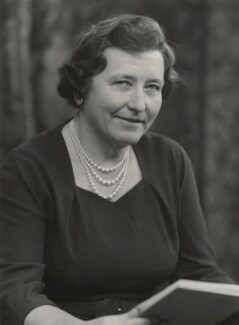 Kathleen Kenyon (1906-1978) is known as one of the world’s greatest field archaeologists, and Great Britain’s most well-known successful Biblical archaeologist.

Kenyon grew up in London in a house attached to the British Museum where her father, Sir Frederick Kenyon, was director and principal librarian. Living in such close proximity to the museum sparked her love for history at an early age. Throughout her career she stayed busy by publishing, writing, teaching, and managing academic institutions. She was in academic management at the Institute of Archaeology at the University College London and St. Hugh’s College, Oxford University. Her field career consisted of work in Britain, Africa and Palestine.

In 1928, Kenyon joined excavations under the direction of Gertrude Caton-Thompson in Great Zimbabwe (what was then Rhodesia). In 1929, she went to Verulamium, the 2nd – 4th century AD Romano-British site near St. Albans with the Wheeler’s excavations. Kenyon took part in multiple U.K. excavations throughout her lifetime, which included: Sutton Walls in Herefordshire, three Iron Age hill forts at Breedon on the Hill in the West Midlands, Southwark Cathedral in London, the Jewry Wall excavations in Leicester, and the Wrekin in Hertfordshire. During 1948-1951, she helped direct excavations in the Carthaginian,  Phoenician, and Roman city of Sabratha on the Libyan Coast.

In the 1950s, Kenyon was busy with excavations in Ancient Jericho. At the time, she was also the Director of the British School of Archaeology at Jerusalem (BSAJ). It is here where she got her Arabic nickname – ‘The Great Sitt.’ When finished with Jericho in 1961, she began excavations in Jerusalem. She made ground-breaking discoveries about the history of the city, and it was there that she created the Wheeler-Kenyon method with Sir Mortimer Wheeler. This archaeological excavation method consists of creating a grid of five-meter squares, with catwalks between the squares. The catwalks are not excavated initially, but the five meter squares are. The catwalks form a record of the layers within each square. The Wheeler-Kenyon method forces archaeologists to excavate slowly, carefully, create drawings of the sections, and keep highly detailed records. Kenyon stated that only by using her method could one’s finds be securely dated.